How Much Does Alcohol Affect Lifting?

Home » Lifestyle » How Much Does Alcohol Affect Lifting? 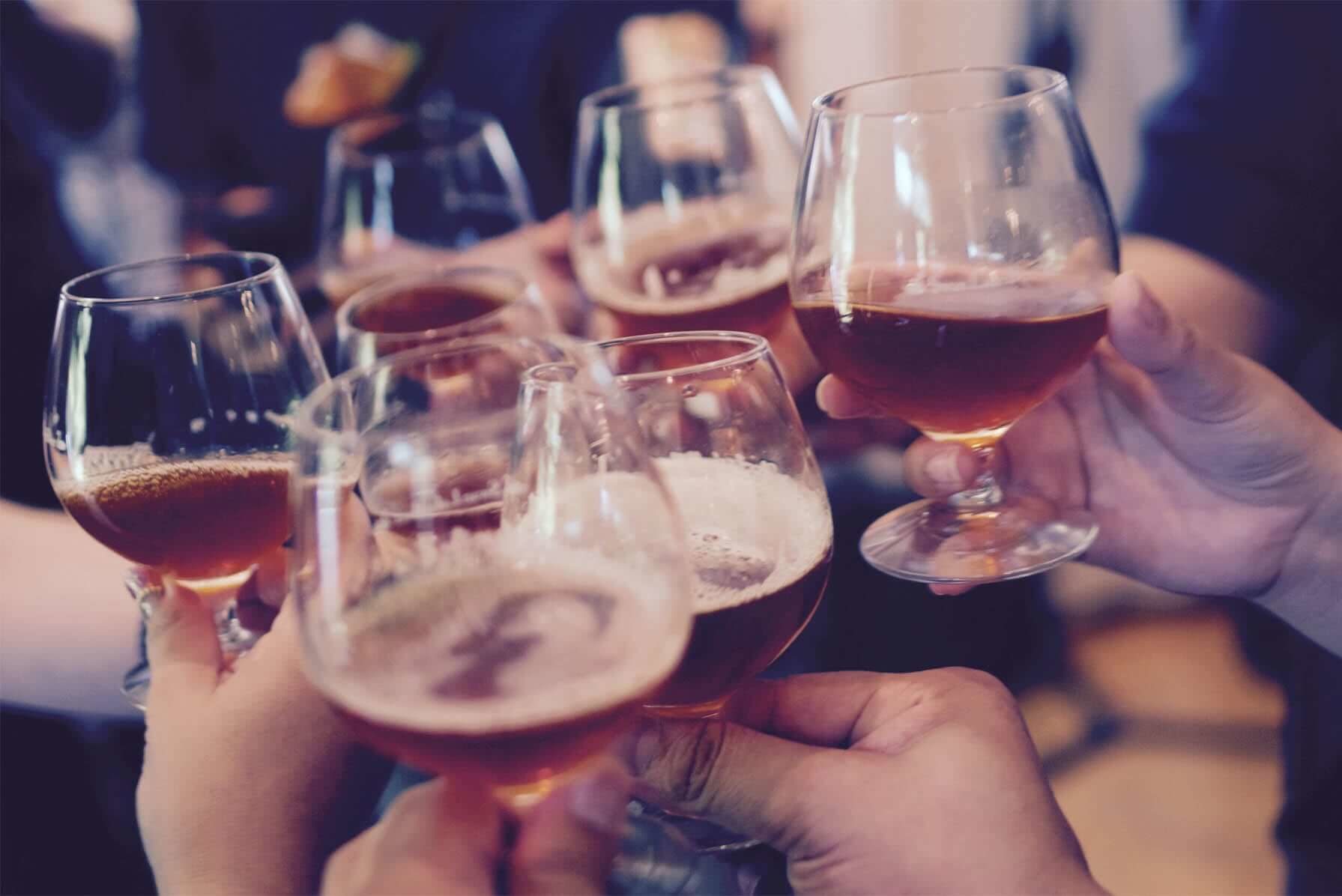 While the clash between alcohol and fitness has existed since cavemen did curls with stones and ancient farmers fermented their crops in preparation for the weekend, there still remains a great amount of ambiguity as to how detrimental alcohol is on the physique of someone who lifts.

Most people are aware that alcohol has some effect on performance and results in the gym but the extent to which it affects those things can be shrouded for many.

In short, alcohol has a definitive negative effect on performance, recovery, and results.

The main reasons for this are its effect on protein synthesis and hormones, its nutritional makeup and calories, its effect on sleep, and the effect it has on hydration.

After any sort of strength training has occurred, the muscles which were trained require protein to be rebuilt. This process of the body supplying protein to these muscles is known as MPS (muscle protein synthesis).

MPS works by creating new proteins that are sent to the damaged muscles and replace the damaged proteins. New muscle is added when muscle protein synthesis exceeds MPB (muscle protein breakdown). After training, MPS is elevated for more than 24 hours and does not return to baseline levels for up to 48 hours.

When alcohol is consumed, however, this process is disrupted. Alcohol has been shown to lead to a decease of 24% in MPS after 9 drinks. The amount of alcohol consumed correlates with the effect on MPS, so more drinks will have a higher decrease and less drinks will not be as impactful. Nonetheless despite even a small number of drinks being consumed, this is still a major disruption to the body’s natural way of rebuilding itself and will result in less muscle mass being added following training.

Knowing this, if you are going to drink alcohol it would be better to at least time consumption of alcohol on days of the week that correlate with rest days. A balance between working out and enjoying weekends is valuable to maintain so in order to achieve the best of both worlds recovery days and drinking should fall on the same days.

If you choose to workout every day of the week then it would be best to drink following the least intensive workout of the week which will have resulted in the least amount of MPB, like abs or a cardio session. It is best to train 5-6 days a week, with at least one day off so the best use of this day might be on a weekend to have a few drinks, permitting only a minimal effect on MPS and near full recovery for the workouts done during the week.

Despite the timing of when choosing to drink, there are still extended consequences that alcohol has on testosterone.

A study conducted in 2004 which examined the impact that alcohol has on DHEA (dehydroepiandrosterone), testosterone, and estradiol levels found that alcohol decreased testosterone in men by 6.8% following moderate drinking for 3 weeks. This may seem negligible but a near 7% decrease in testosterone is enough to impact gym performance, strength, and overall results from training. This study also only looked at the effect of mild alcohol use after 3 weeks, long term moderate consumption is likely to compound this number.

A second study looking at alcohol use over the long term found that long term alcohol consumption reduces the size of testes causing testicular atrophy leading to hindered testosterone production and infertility in some. There are a handful of other studies similar to these which have also found a link between declining testosterone and alcohol.

While a few drinks 1-2 days per week will not render you completely weakened and infertile, frequent alcohol consumption is strongly attached to the outcome of lowered testosterone levels.

Alcohol Has Next-Day Effects on Hormones

Combining with the long term effect that alcohol has on testosterone, drinking also heavily influences hormonal levels in the same 24 hour period.

One study on the relationship between alcohol and hormone levels identified a 23% decrease in serum testosterone concentration among 20-26 year old males 10 hours after alcohol was consumed.

A third substantial hormonal change from drinking alcohol was that cortisol levels were increased by 36% up to the 14 hour mark following drinking. This supports the “hangxiety” phenomenon where heightened amounts of anxiety are felt the morning after drinking.

Cortisol is the body’s primary stress hormone and is naturally released in response to stress and during longer periods of exercise. Cortisol is catabolic meaning it decreases protein synthesis, depletes muscle mass, and raises energy expenditure. A regular catabolic state will prevent muscle mass from being built and also limit the ability of testosterone to function normally.

A decrease of 23% in testosterone and a 36% increase in cortisol is a perfect cocktail for a rough hangover and also a blow to the results from training.

If alcohols effect on hormones does not cause concern, the effect drinking has on caloric intake and fat loss may change that perspective. For those who are cutting or require restrictive diets to ward off fat, alcohol tends to be a very poor food item in terms of its macros, overall calories, and nutritional content.

Harder alcohols like vodka and whiskey are not awful in terms of calories, but going through 5-7 beers on a late night out, depending on which brand, will require 600-1,000 available calories without any redeeming nutritional value or protein content.

On average, most beers have 10-15g of carbohydrates, 0-1g of protein, and 0g of fat per can. 5 beers would therefore take up about 20% of available carbohydrates when cutting at 2,600-2,800 calories without adding any grams of protein. This would skew the ratio of macros, force other foods out of the diet, or simply cause the cut to go off track by ignoring the parameters of a deficit.

Even when not on a cut, drinking alcohol negatively effects body composition. Since alcohol is full of carbohydrates and is registered by the body as a toxin it is metabolized first, regardless of other foods being consumed. This means that if you go out to eat and drink, all food being eaten in addition to alcohol will not be metabolized immediately and will be converted into fat at a higher rate.

Including the hit to testosterone, elevation of cortisol, and decrease in protein synthesis, the effect of drinking on hydration is still one of the most severe side-effects impacting recovery, performance, and maintaining muscle.

Dehydration is the main cause of having a hangover the day after drinking and can have a significant negative effect on how well you can train.

Alcohol causes dehydration in multiple ways. One of the main contributors of alcohol to dehydration is that it acts as a diuretic. This means that alcohol forces water out of the body, increasing urine output and, in some people, sweating, leading the body toward a less hydrated state.

A second way that alcohol causes dehydration is by reducing the amount of ADH (anti-diuretic hormone) that you are able to make. Normally, when the body is dehydrated, ADH is activated and decreases urine output, increasing water retention and slowing the rate of dehydration. This mechanism is disrupted by drinking due to alcohol inhibiting the production of ADH in the pituitary gland, then allowing urine output to remain unaffected.

Simply drinking water won’t offset alcohols effect on hydration because without ADH able to activated, the diuretic effect of alcohol will flush the water out of your system without the body being able to hold onto and use it.

One more impact of drinking on your physique is the effect it has on sleep.

Sleep is one of the most, if not the most, important factor for recovery and muscle growth. A study by the University of Chicago determined that one week of poor sleep (5 hours a night) decreased testosterone levels by 10-15%. Adaptions that the body performs in response to training take place during sleep and without quality deep sleep, muscle mass will not be able to be built and efforts in the gym will be effectively negated.

Alcohol disrupts the natural circadian rhythm of the body by blunting its ability to respond to light cues which influence when and how you get tired. The body is very respondent to cues of when it should get tired, causing melatonin to be released at the correct times and the capability to be awake and alert during the day. When the ability to notice these cues is removed, sleep is impacted.

Alcohol consumption in the evening, according to this study, also directly lowers melatonin itself by 15-19%. Melatonin is a sleep hormone that regulates waking and sleeping periods as well as overall quality of sleeping. Lowered production results in worse sleep and, in consequence, impacted recovery.

Drinking alcohol even further effects sleep by boosting levels of adenosine, which has depressant-like qualities, making you tired at times other than the evening and changing when you naturally want to sleep. When you do sleep, the REM-cycle is thrown off and becomes more shallow, decreasing the amount of deep sleep you get at night.

After listing the numerous down-sides to alcohol consumption, it’s worth naming a few of the reasons alcohol can be good for you.

A balance between training and enjoying going out is important. Many weightlifters and dedicated athletes develop a monk-like lifestyle which is ultimately unsustainable. Working towards absolute optimal results is a worthwhile pursuit but by not allowing yourself the occasional night out, you can increase the risks of binges, decrease happiness, and build less strong overall relationships with others.

Knowing how alcohol effects you is important, knowledge is power, and with the knowledge of how drinking effects your physique you’ll be better able to navigate a world full of freedom and make informed choices on how to use that freedom to achieve what you want, both for your goals in the gym and life.

For more on balancing life, hormones, training, and the gym, such as whether or not you should work out when sore and how milk can affect estrogen levels in men, click here.